Peace Garden (noun)
A public botanical garden created to commemorate the end of conflict, OR a public space dedicated to pay homage towards the commitment of peace, or rather, freedom from the disturbance, thereby promoting quiet and tranquility. A welcoming retreat.

The DRPG was conceived to honour the 1812 Battle of York, when Canadians of both Immigrant and Aboriginal status, fought side by side to fend off American invaders.

Because the intersection of Dundas West was once part of an indigenous trail that is, today celebrated as part of a Bicentennial Peace Garden Trail Network (combining Canadian History with promotion of Toronto’s First Nation’s heritage) – Founding Project Managers had set out to create a venture that could include many community groups as well as, benefit the area, aesthetically by serving as a Welcoming Northern Gateway to the Roncesvalles Village.

Designed by Mary Tremain of PLANT Architect inc, the Peace Garden will now provide a space for enjoyment, contemplation, and community gathering, it also celebrates 200 years of friendship and peace for the City of Toronto and in particular, to the residents of the Roncesvalles area.

Seating areas consist of curved wooden benches that are thoughtfully integrated within the tapered concrete planter walls that surround and protect the garden beds. 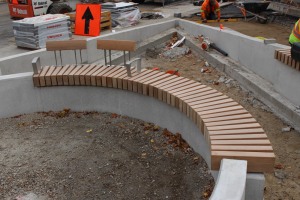 construction of the curved benches

Plants and trees reflect a range of contemporary and heritage varieties local to the High Park area. Decorative, engraved granite paving tiles set among passive solar blocks, comprise the walkways, known as the Peace Path. Lighting has been incorporated to improve visibility and highlight the circular interior space.

An interpretive sign provided by DRPG community partners; the Roncesvalles Village BIA, and the Mississaugas of the New Credit First Nation, will be installed at the southwest corner. This sign will be unveiled on Saturday June 11th at the garden’s opening ceremonies.

12:00 – 5:00 at the Indigenous Music Stage: Ritchie Avenue at Roncesvalles Ave

WHAT TO EXPECT: At the Opening Ceremony: