Coinciding with nationally recognized Earth Day, on April 22, 2017, several members of RoncyWorks arrived to clean planter beds, sweep up litter and remove aging signage along the length of Roncesvalles Avenue. This effort was part of the annual RoncyWorks spring cleanup and the City’s Clean Toronto Together campaign. 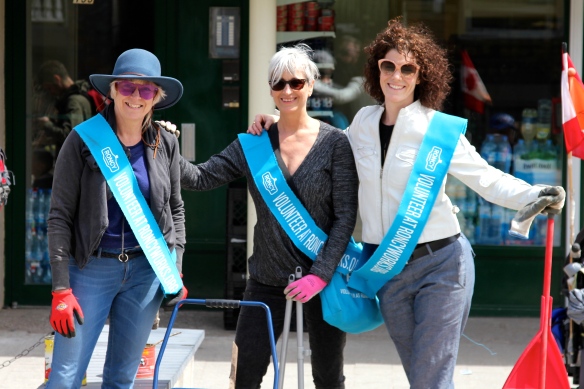 Hilary, Veronica and Rahel are please to note a decrease in litter including cigrette butts in the gardens along Roncesvalles and grateful for the street culture changes that have led to this. PHOTO CREDIT: Claude Barnes

RoncyWorks gardener, John Sledziewski picked a bagful of butts from the gardens and swept around the edges, for a finishing touch. PHOTO CREDIT: Claude Barnes

To recognize Earth Day, communities and individuals typically plant trees and organize cleanups. We are delighted to have the corporate office for Earth Day Canada located right here in Roncesvalles Village. 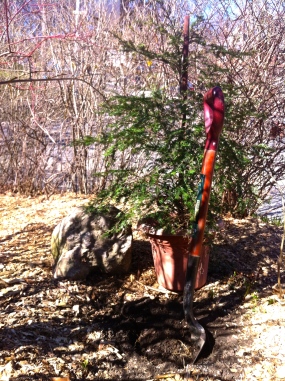 Plant a tree for Earth Day

Earth Day Canada is committed to planting 25,000 legacy trees for Earth Day’s 25th Anniversary and they are doing so by a funded, crowd-planting campaign called #Rooting4Trees. Sponsorship is available in monetary increments from $10 – $10,000. Contribute or support them, if you can.

The City of Toronto promotes its annual 20 Minute Make Over  for businesses, schools and individuals who may wish to participate, by doing clean up efforts along streetscapes and parklands. The efforts will keep our City clean and green. Participate if you can, sometime over the weekend of April 22 – April 24th.

However, if you have the space and would like to contribute to the future of our community, consider planting a tree in your own yard. Let’s plant Trees now, because it takes at least a decade for them to reach maturity. Trees are excellent carbon gas absorbers, passive solar heating regulators and have been proven to make people feel happier, just by living near them.

Trees produce an oil called phytoncide, which is an antimicrobial compound known to ward off infections like antibiotics do. The chemical, transferred by scent is inhaled into our bodies. The physical act of hiking in a forest, exercises your body, which in turn, encourages your brain to release endorphins. Endorphins trigger a positive feeling that is similar to morphine.

Hundreds of senior scientists and clinicians from universities, hospitals and research institutes across Ontario Canada, collaborated in the development of a study that would query people about their lifestyles. It was hoped that data could be collected that would reveal risk factors of chronic disease. The group specifically wanted to investigate issues surrounding ailments like cancer, diabetes, heart disease, asthma and Alzheimers. Almost unexpectedly, responses showed that people who lived in or near areas of mature tree forests, tended to have quicker rates of post illness recovery and less evidence of the more severe, chronic illnesses.

People who live along tree lined streets, live happier and healthier lives and the planting of them, is a spectacular way to celebrate Earth Day!

Consider planting a tree for Earth Day; its our environment… let’s live in it wisely.