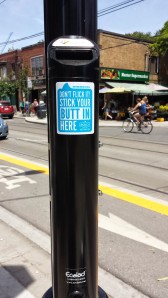 New ashcan on Roncesvalles Avenue is part of a pilot study for cigarette litter prevention.

Have you noticed the addition of some black cylinders to a few of the tree guards along Roncy? Perhaps you figured out what they were before additional clues were added.

These ashcans are part of our exploration of more permanent solutions to butt litter after rolling out our hand-made butt tins two years ago. They are also part of a pilot study in Toronto to quantify the difference they make in reducing cigarette butt litter.

RoncyWorks and the Roncesvalles Village BIA is involved in running a cigarette litter scan on a three-block area of Roncesvalles Avenue to test the effectiveness of the ashcans in combination with a public awareness campaign.

The cigarette litter problem is not just one that upsets our gardeners who see the plant beds they’re working on treated as ash trays. It’s a global litter problem that cities are grappling with. The butts are not biodegradable as many people think. They can take years to break down. They end up clogging our filtration systems and waterways. They leach toxins into our water and soil. And, they get eaten by wild and domestic animals, to their detriment, to say the least.

So, we wanted to make sure the new ash cans would be spotted by local and passing smokers, so we added stickers to these long, black, cylindrical ashcans. There’s a second set being installed that have a silver top rather than being all black, which should make them more visible, especially in the evenings. If the ash cans don’t get sufficient use, we’re rolling out some signs, posters and point of purchase items in an effort to get smokers to stop flicking their butts.

They may be small, but they sure add up fast. During our spring cleanup at the end of April, our Scan team counted over 1,000 butts in one plant bed alone that was in front of Dizzy Gastro Sports Pub. Yet Dizzy has been great these past few years at putting out pails to get their smoking customers to butt out responsibly. Now Dizzy has one of the new ashcans conveniently located out front. We’re hoping the other cafes, restaurants and bars on Roncy, as well as the convenience stores, will want want one near them too. But most of all, we’re hoping the new ashcans will get well used.

After the removal of our home made ash cans, cigarette butt litter on Roncy has definitely increased. We need to explore more permanent solutions to this problem. This should include the addition of cigarette receptacles interspersed between the trash cans near spots where there is a larger volume of butts accumulating.

Other cities and communities have been grappling with the problem, so let’s learn from them. In San Diego, their longest running environmental non-profit, I Love a Clean San Diego, runs regular cleanups and is addressing prevention. This year they have partnered with other non-profits to install ash cans along their streets. They are piloting the program in three communities and are monitoring the volume of butts before and after ash can installation.

The DropPit is a solution used in the Netherlands to address the most widespread form of litter: cigarette butts and chewing gum. Makes you wonder how they handle this in the winter time.

Even Paris wants smokers to stop tossing butts in the street. This year they have started attaching little ribbed resin disks to public waste bins where smokers can put out their cigarettes.

END_OF_DOCUMENT_TOKEN_TO_BE_REPLACED

Looking down the road

Toronto's Roncesvalles Avenue is thriving once more, after two years of reconstruction finished in July 2011. To show our appreciation for a great street and the shops that stood fast through the construction phase, we continue to invest our time and attention.

RoncyWorks stemmed from Roncesvalles Renewed, a community group that saw residents, business owners, politicians, city planners and transportation officials working together. As a result, we now have the conditions necessary for the trees to flourish, better sidewalks and the makings of an avenue that all can enjoy.

Our collaboration continues as we tend to the new trees, planting beds, and public spaces, while growing our network of volunteers who pitch in to make things even better.